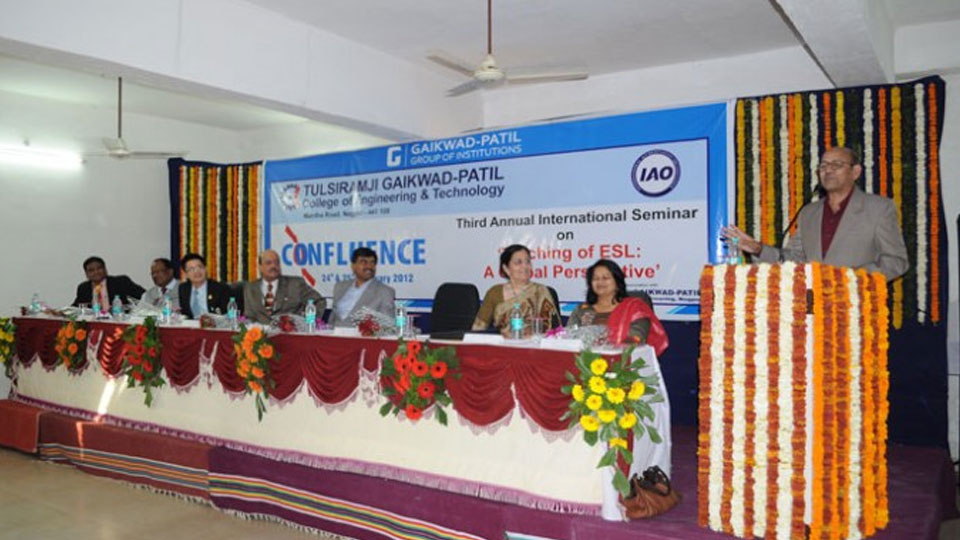 The Departments of Basic Sciences and Humanities of Tulsiramji Gaikwad-Patil College of Engineering and Technology, Nagpur (TGPCET) and Abha College of Engineering, held Confluence, its Third Annual International Seminar on ‘Teaching and Learning ESL / EFL : A Global Perspective’ on February 24th -25th, 2012.

English as a second language poses a challenge for non-native speakers for a variety of reasons. Hence the seminar aimed at creating a platform to address the problems of English learners and teachers by bringing about an exchange of ideas. The seminar endeavored to throw light on areas of common concern for all and improve upon the conventional pedagogy of teaching English. Above all, it also tried to create a network of English teachers who were able to draw upon each other’s expertise and experience.

The event was inaugurated by Dr. Pankaj Chande, President of the Association of Indian Universities, and Vice Chancellor of Kavikulaguru Kalidas Sanskrit University, Ramtek. In his inaugural address, he opined that the English language has few words of its own and has assimilated many words from other languages such as Latin, Greek and even Hindi and Sanskrit. It is the only language that has gained worldwide popularity irrespective of its being the youngest language. But unfortunately it is also the only language which is facing the danger of extinction due to its misuse in mobile texting. However, he said, every language is constantly changing and English is no exception. But in the midst of this flux, it was important to preserve the beauty of the language, he said.

Dr. G.Rajagopal, Professor (Dean, School of Language Education, EFL University, Hyderabad), who has been a mentor forConfluence since its inception, was the Guest of Honor at the Inaugural function. He stressed the need for teachers to take initiative in organizing events such as Confluence for the enrichment of teaching pedagogies in English and lauded TGPCET for its steps towards that goal.

All papers presented in this seminar are available in an e-journal on our official website. Besides, the colleges are also launching their first peer-reviewed journal which will contain the very best and path-breaking papers presented at Confluence as also papers contributed by others from the English fraternity. The colleges also plan to undertake a membership drive for a Professional Society of English Teachers. It is noteworthy that TGPCET and ACE are the only Engineering colleges in India that hold a language-based seminar at an international level every year.